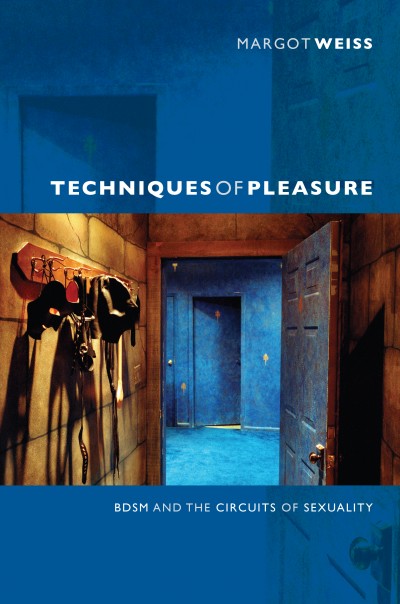 Techniques of Pleasure won the 2012 Ruth Benedict Book Prize for Outstanding Monograph from the Association for Queer Anthropology and finalist for best book in LGBT Studies from the Lambda Literary Foundation.

Find in a library: worldcat.org

–> Read an excerpt of Techniques of Pleasure

“Techniques of Pleasure is an important theoretical and empirical contribution that moves beyond the existing analyses in feminist and queer theory that depict SM as either inherently sexist or inherently transgressive. Building on both these theories without discarding their core assumptions, Weiss demonstrates how SM can be both sexist and transgressive, often at the same time. Beyond the empirical focus of this book, Weiss contributes to the broader literature on late capitalism’s impact on bodies, sexualities, and subjectivities.”—Amy L. Stone, American Journal of Sociology

“Weiss offers a nuanced reading of sex, power, consumption, and subjectivity that makesTechniques of Pleasure a major contribution to new theoretical work on neoliberal economic processes and the anthropology of sexuality and gender.”
— Michael Connors Jackman, American Ethnologist

“Margot Weiss’ sociological approach to the formation of sexual desire is breathtakingly smart and powerful, and should be required reading for any serious scholar of sexuality henceforth.”—Adam Isaiah Green, Contemporary Sociology

“Weiss’s book offers a fascinating extension of debates about the sexual politics of neoliberalism, and a consideration of how local economic changes in the San Francisco Bay Area have reconfigured sexual communities there…”—Gavin Brown, Society and Space

“[A] vital, if controversial, contribution to the body of writing and theory on BDSM.”—Nina Lary, Bitch

“[A] useful scholarly monograph on how once perversions of the select have become indulgences of the many. . . . Techniques of Pleasure is at its best when Weiss describes what goes on at gatherings of consenting adults engaged in semi-public and non-commercial fetishistic S-and-M role-play. To her credit, she includes extensive quotes from practitioners she meets along the way. Ethnographers have the eyes and ears of an explorer.”—David Rosen, The Brooklyn Rail